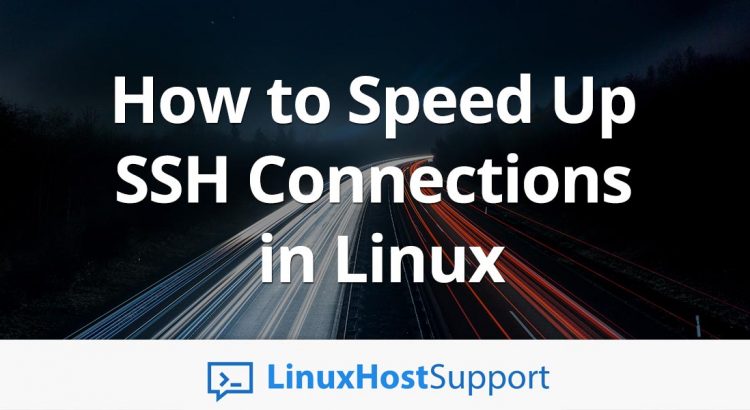 1. Disable DNS lookup on the server

The OpenSSH server has DNS lookups enabled by default, this means that the OpenSSH server will first look up the host name of the connecting host and then will check if the resolved host name’s IP address is the same as the connecting IP address.To disable DNS lookups, add the ‘UseDNS’ directive at the end of the ‘/etc/ssh/sshd_config’ file and set the value to ‘no’:

If you open multiple SSH connections to your server frequently, it would be best to configure your SSH client to use the existing connection when creating a new SSH session.This can speed up the sessions opened after the initial connection as it avoids the overhead of establishing a new connection.

Open the ‘~/.ssh/config’ file with nano and add the following lines in it:

The ‘Host *’ directive above tells the SSH client to re-use the initial connection for all remote servers.

3. Setting up a password-less SSH login

Setting up a password-less SSH login is pretty easy and saves you time because you don’t have to enter a password when you open a new SSH connection.This can be done in three easy steps.

2.Copy the public key to the remote server using this command:

3.Log in to the remote server to check if the password-less login is working:

If everything goes well you should see the output displayed above.

4. Changing the encryption used by the OpenSSH server

Changing the default cipher order for the SSHv2 protocol on the OpenSSH server can further speed up SSH connections as some ciphers can encrypt data faster than others.
For Ubuntu 16.04 the default order according to ‘man ssh_config’ is:

If you do have a server which supports the new AES-NI instructions it would be better to change this order and add it to the end of the ‘/etc/ssh/sshd_config’ file like this:

According to several benchmarks available online, aes128-ctr is twice as fast as chacha20-poly1305 on processors that support the AES-NI instructions so if you have a high-bandwidth connection to your server the file transfer speed should increase significantly after making the change.

That’s it, now your SSH connections should be a lot faster.

Of course, you don’t have to Speed Up SSH Connections in Linux, all by yourself, if you use one of our outsourced linux support services, in which case you can simply ask our expert Linux admins to speed up the SSH connections on your Linux server for you. They are available 24×7 and will take care of your request immediately.

PS. If you liked this post on how to speed up SSH connections in Linux, please share it with your friends on the social networks using the buttons on the right or simply leave a reply below. Thanks.